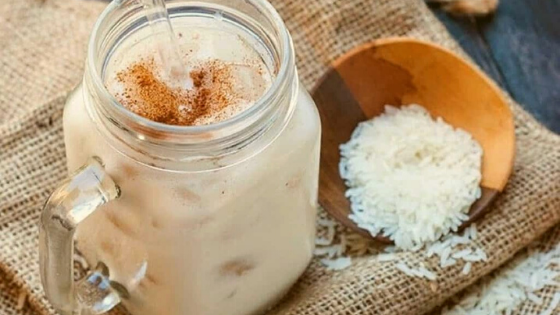 Chicha is one of the most popular street drinks in Venezuela and it’s like a rice (or pasta) drink. Now you can make your own homemade version of this tasty chicha with this recipe!

A Venezuelan chicha is a super thick drink made with rice (or pasta) and milk. It is dense and, if you add lots of ice, you get a refreshing and fulfilling drink that tastes like heaven.

Chicha is a classic South American drink that you can find in a lot of countries and all of them have a different interpretation. In Perú, they have chicha morada made of corn and it has a strong purple color. The Colombian chicha is also made of corn but isn’t purple. And of course, Venezuelan chicha that is made of rice (or pasta) and I will show you in this post how to do it!

This traditional drink is heavy. I mean, after one glass you will end up with a full stomach. It’s blended rice or pasta with milk and sweetened condensed milk. This is a bomb! But it is so delicious and you can truly feel the Venezuelan gastronomy with one sip.

Even though the traditional chicha is made of rice, in the 90s people started selling chicha de pasta, because it was cheaper and faster to prepare, and because the drink is thicker and without granules.

How to make chicha?

Here you’ll find the recipe to prepare chicha with pasta, not with rice. This pasta chicha is easy to prepare and you can easily find all the ingredients. The good thing is that you can make lots of it, and just store it in the fridge!

Heat the water until it boils, then add the pasta and the cinnamon stick. Place it on low heat for about 25 minutes. Allow it to cool down.

The mixture should be creamy and uniform. If it gets too thick when it cools down, dilute it with a bit of water or milk, and adjust the sweetness to your taste. You can put it in the fridge to be served cold, with some crushed ice. Serve it also with some condensed milk and cinnamon powder on top.

The modern versions of chicha use not only cinnamon and condensed milk as toppings, but also chocolate or coconut shavings, cookies, or gummies.