In 2013 I did a road trip around Portugal. I drove to cities like Porto, Lisbon, Evora, Alcobaca, Sintra, etc. It was an amazing experience that made me fall in love even more with my country!

Facts about the country:

The 1755 Lisbon earthquake occurred in the Kingdom of Portugal on the morning of Saturday, 1 November, the holy day of All Saints’ Day. In combination with subsequent fires and a tsunami, the earthquake almost totally destroyed Lisbon. 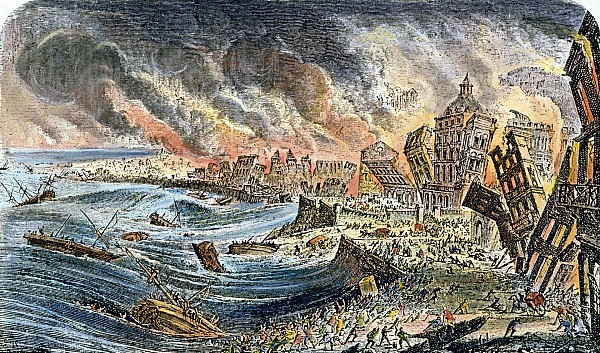 Since there were a lot of places I didn’t know in my own country, I decided to go with Ricardo on a real adventure and do a road trip across Portugal in my car.

We started by visiting Conimbriga, close to Coimbra. It was sooo hot that I almost fainted, even though I was drinking a lot of water. It was a scary feeling!

Conímbriga is one of the largest Roman settlements excavated in Portugal, and was classified as a National Monument in 1910. It consists of various structures such as a forum, basilica and commercial shops, thermal spas, aqueducts, insulae, homes of various heights (including interior patios) and domus, in addition to paleo-Christian basilica.

A visitors’ center was constructed to display objects found by archaeologists during their excavations, including coins, surgical tools, utensils and ceramics.

Then we stayed in Tomar for one night, sleeping in a camper site. Tomar is very nice, I liked to visit Convento de Cristo, with the famous manueline window.

The town of Tomar was born inside the walls of this convent, constructed under the orders of Gualdim de Pais, the fourth grand master of the Knights Templar in the late 12th century. 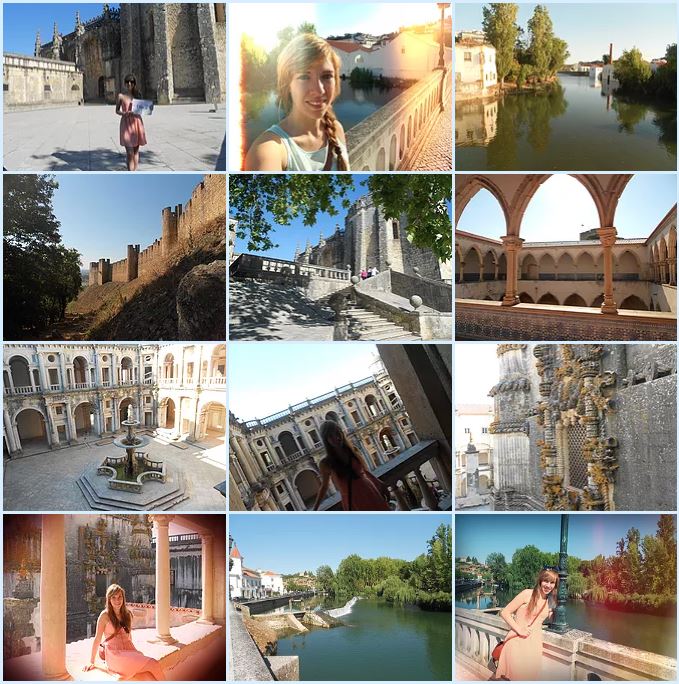 Tomar is one of Portugal’s historical jewels and more significantly was the last Templar town to be commissioned for construction. The park with the river are very nice too.

On day 2 we also visited Mosteiro da Batalha, a really nice monument with a nice architecture. The Monastery of Batalha was erected in commemoration of the 1385 Battle of Aljubarrota, and would serve as the burial church of the 15th-Century Aviz dynasty of Portuguese royalty. 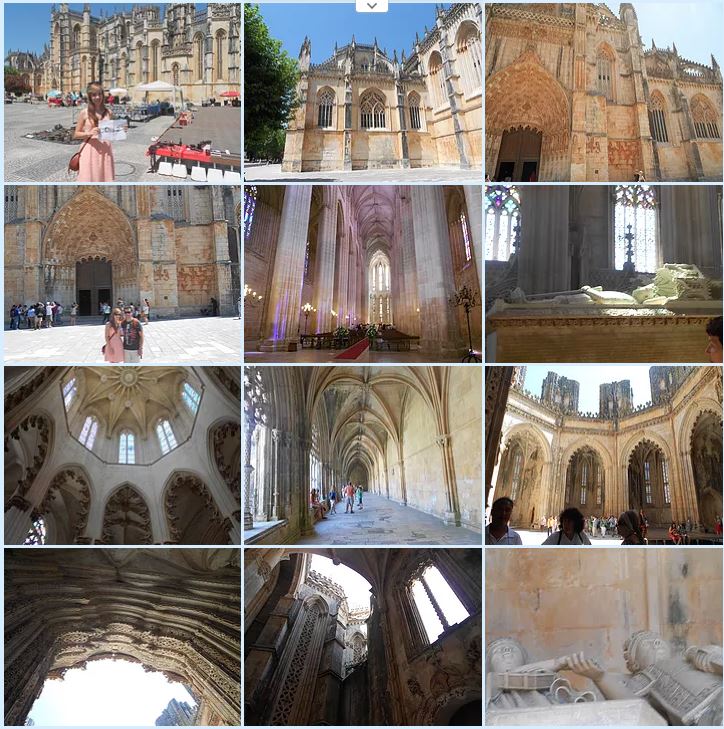 It is one of the best and original examples of Late Gothic architecture in Portugal, intermingled with the Manueline style.

After Batalha, we visited another one, Mosteiro de Alcobaca. We didn’t go inside though.  The Alcobaça Monastery was founded in the medieval period by the first Portuguese King, Afonso Henriques, in 1153, and maintained a close association with the Kings of Portugal throughout its history.

The church and monastery were the first Gothic buildings in Portugal, and, together with the Monastery of Santa Cruz in Coimbra, it was one of the most important of the mediaeval monasteries in Portugal.

The next day we went to Obidos. The area of the town of Óbidos is located on a hilltop, encircled by a fortified wall. This is the coolest small village ever! Very typical, with blue and yellow on the walls, contrasting with the white. 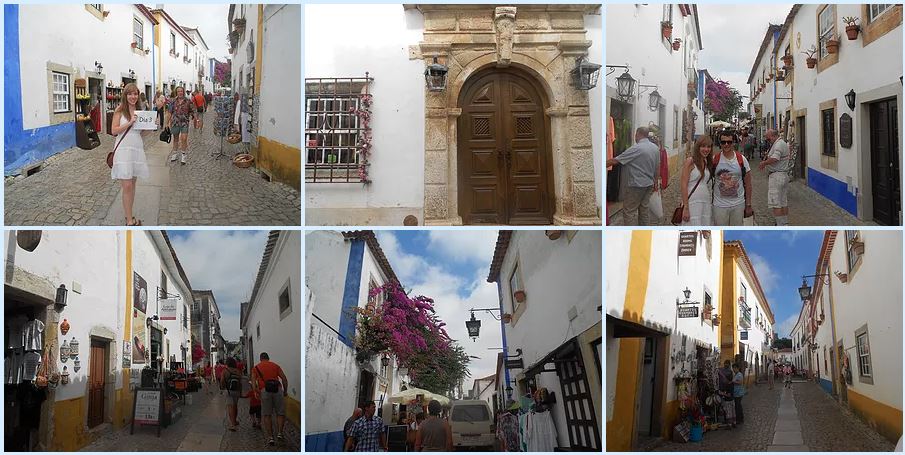 Óbidos remains a well-preserved example of medieval architecture; its streets, squares, walls and its castle are a popular tourist destination. The castle now houses a pousada.

There are a lot of craft and souvenir shops around Obidos and a lot of flowers everywhere, which makes it a very cute place.

On the same day as Obidos, we went to Buddha Eden, an amazing place hidden in Portugal, not so touristic. Just an hour north of Lisbon, in the countryside, this beautiful managed garden intended as “a place for reconciliation” can be found. Buddha Eden has 35 hectares of natural fields, lakes, manicured gardens, contemporary sculpture…and Buddhist statuary.

Six tons of marble Buddhas and figures were are installed throughout the garden. Walkways, piers and gazebos provide access to areas for contemplation. And additional feature of the gardens is a cobalt blue replication of the Terracotta Army from China.

The story of how the garden came into existence is both intriguing and endearing.  In 2001, a wealthy Portuguese investor and art patron José Berardo was shocked by the Taliban government’s destruction of the Giant Buddhas in Afghanistan.  In response to the demolition of these masterpieces of the late Gandhara period, Berardo initiated the Buddha Eden in an homage to the cultural and spiritual monuments.

This place has an amazing potential, but I guess a lot of people have never heard about this place. I loved the big lake and the giant statues. I really recommend it!

Then we went to Lisbon, the capital city of Portugal. We strolled around the big commercial streets and we ate some snails while drinking a beer. We stayed there for one night, in a albergue for young people. Lisbon is one of the oldest cities in the world, and the oldest in Western Europe.

The next morning we went to Sintra. For me, Palacio da Pena is the most beautiful monument in Portugal. This colorful palace is amazing! It was hard for me to drive to such a high place, on top of a big hill, but it was well worth the effort.

The Pena Palace is a Romanticist castle that stands on the top of a hill in the Sintra Mountains. It is a national monument and constitutes one of the major expressions of 19th-century Romanticism in the world. In 1995, the palace and the rest of the Cultural Landscape of Sintra were classified as a World Heritage Site by UNESCO.

After Sintra, we continued our way down south to Evora, in Alentejo. We visited a roman temple and a chapel covered with human bones and sculls. Evora is a very interesting city to visit too.

Due to its well-preserved old town center, still partially enclosed by medieval walls, and a large number of monuments dating from various historical periods, including a Roman Temple, Évora is a UNESCO World Heritage Site. It is also a member of the Most Ancient European Towns Network.

Also in Alentejo, we stopped in Reguengos de Monzaraz. This place is a small heaven in the middle of nowhere.

It’s very rural but it has an amazing atmosphere. Everything is super cute there!

We were so close to the border with Spain, that we decided to cross it and go to Olivenza, a city that belongs to Spain but for centuries belonged to Portugal and technically, according to some papers, should still be part of Portugal.

There are still traces of Portuguese culture and language in the people, although the younger generations speak Spanish only. At the beginning of the 1940s the city was reportedly mainly Portuguese-speaking, but after the 1940s a language shift towards Spanish took place.

On our sixth day we visited Elvas, a fortified city. Its very nice too, wih a lot of white and yellow. 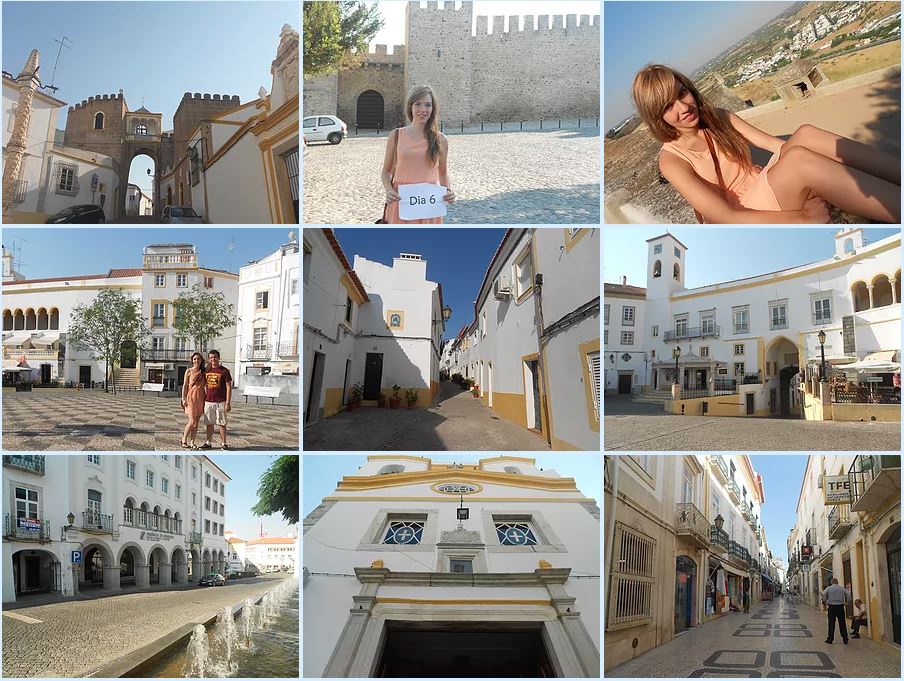 Elvas is among the finest examples of intensive usage of the trace italienne (star fort) in military architecture, and has been a World Heritage Site since 30 June 2012.

After Elvas, we went to Beja, before returning to the North. We wanted to continue down to Algarve (the extreme south of Portugal) but we thought it would be too much, since I was already a bit tired of driving so much.

So we came back to the north of Portugal on the 7th day and we went to the Douro Valley and stopped in Lamego. We walked up the huge stairs of Sanctuary of Our Lady of Remédios.

The Sanctuary of Nossa Senhora dos Remédios in Lamego is located on the hill of St. Stephen, being a major pilgrimage church in Portugal. There is a vast staircase that rises to the top of the hill, up to the shrine. Erected in 1750 to its conclusion ends only in 1905 and replaced the chapel dedicated to St. Stephen.

This was an amazing adventure and it was super interesting to visit all of these cool places without even leaving my own country.